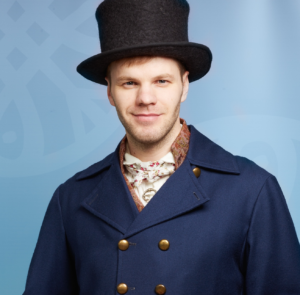 Dance teacher, who stands firmly on the ground

Maido Saar, a choreographer and dance teacher, celebrates this spring his 60. anniversary. To Maido’s major surprise his former student and main choreographer of this year’s dance celebration, Margus Toomla, also performed for his guests. But contrary to everybody’s expectations he didn’t perform a solo act of a men’s dance nor did he invite the guests to dance the famous „Tuljak“ − instead he delivered a song.

Regardless of the wave of meetings and rehearsals that hits like a tsunami the organizers of the dance celebration before the event, Margus remains flexible and agreeable when I ask him to find some time for this interview. For him it’s not a problem to have a five-six-hour meeting with dance people and still find strength to concentrate on an interview − he has learned how to manage his time. Margus is a master of many trades and for the past nine years has worked fulltime at the Pirita Leisure Centre.

„The role of a manager has taught me how to make decisions and have trust in myself,” describes Margus his day-to-day work. „When Meelis Kompus, one of the authors of the concept of this year’s dance celebration, asked me in 2014 to join his team and offered me a position of an main choreographer, I didn’t hesitate for even a second. My work at the Pirita Leisure Centre has provided me a kind of protective layer and I am not afraid to take responsibility.“

Margus found his way to folk dancing not through traditional devotion and call, which usually guides devotees from early childhood to the right direction. Although he danced during his school years at the Viimsi secondary school in folk ensemble Lee under the guidance of Maido Saar and participated in 1997 at the dance celebration, he hadn’t by the time of his prom night discovered for himself the magic of neither singing nor dancing. That night, as he was sitting with his class mates somewhere at the Viimsi Peninsula at a bonfire, he heard girls chatting about their plan to enter Tallinn University to study dance pedagogy and choreography. They teased him to come along. And that he did, as he couldn’t figure out anything better to do. It is said when his later mentor Maido Saar learned that Margus had decided in favour of the studies of dance pedagogy, he held his head in his hands and was − to put it mildly − shocked.

However, dance teacher and choreographer is exactly what Margus turned out to be. As the days of studying were very strenuous Margus stopped dancing in the ensemble Lee. „Although I am is quite familiar with the techniques of modern dancing and can even do some roll ups, I still master folk dancing best,” Margus admits. It is an irony of fate that now Margus and Maido Saar are both tutors of the former dancers of the folk-dance ensemble Lee and of the employees of the Office of the Chancellor of Justice, who together form a cheerful dancing group called Kindakiri (Mitten pattern). Everything in life that relates to folk dancing is close to his heart.

Margus was right away captivated by the concept of the dance celebration, which is based on an artificially created folk tale about Dawn and Dusk by Friedrich Robert Faehlmann. As his own dance celebration concept was evaluated quite high at the idea contest of the previous dance celebration, he is now even more enthusiastic to carry out the ideas of others and lead the forces at the celebration grounds. „I like the heritage side of the story,“ is Margus feeling enthusiastic. „Our celebration is not a series of individual dances, it’s a whole story. The role of Grandpa is performed by Ivo Linna, who is loved by everyone in Estonia, and there are two more leads, to whom the cherished heritage of previous generations is passed on. The plot is driven by twenty minutes of original music by Maian Kärmas and gymnasts’ performances between the great dances mark the changing of seasons and colour palette. To speak about my original creations then I must admit that I have indeed made the drawings for the final dance. Seven and a half thousand dancers, the sun, circles, patterns…. I am really eager to see, how all this is going to look like on the dance ground!“

Margus has a four-year-old daughter Loviisa and she is a good reason to leave from time to time the city for an old farmhouse in Toila, where he used as a child to spend his summers at his grandma’s. He has spent long days both in a barn and on a pasture and is perfectly aware how rare this kind of old-time countryside place has become for a child born in 21st century. Basically, it is the same thing as the guiding theme around which the whole dance celebration is revolving – golden ball, which we pass on to future generations.

When Margus feels an overpowering need for silence and for some moderate excitement, he goes for a hike or night-time fishing. Stands all by himself at an empty beach in Nõva and catches fish with a rod. Or hikes five days to the highest peak in Finland, which is located at the Norwegian border. To reach this peak one must be able to survive a couple of days without mobile network and tramp dozens of kilometres along the Lapland’s tundra. This is okay with Margus and he loves every moment of it, since by nature he is a person who has both feet firmly on the ground. He lifts his legs up only during the first chords of a dance like „Right and Left“ (Oige ja vasemba) when the work is done and it is a time to celebrate.

And, Margus has a fifth trade too, although a part-time one. He has studied classical singing at the Georg Ots Music School, and this gives him enough nerve to perform some songs by Olav Ehala at the birthday anniversary of his mentor.

The role of Grandpa is performed by Ivo Linna who is loved by everyone in Estonia. There are two more leads, to whom the cherished heritage of previous generations is passed on.

Margus was right away captivated by the concept of the dance celebration, which is based on an artificially created folk tale about Dawn and Dusk by Friedrich Robert Faehlmann.